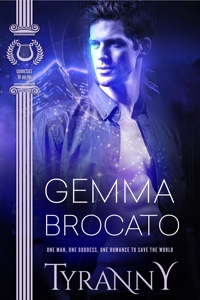 Immortal librarian Clio has existed for thousands of years. Her purpose—to influence and inspire mortals. Now as one has inspired her, a battle is mounting between the Muses and a god who care little for the plight of man. A hostile takeover is imminent at Olympus Enterprises.

History professor Jax Callahan is battling his own uncertainties. His previous employer’s refusal to heed his warnings results in a tragic loss of life. Blaming himself, he no longer believes he can make a difference.

Tyranny will stop at nothing to appease her father and succeed in taking over Olympus and the world. To save mankind, Clio must reveal herself as a Muse to Jax, the man she’s fallen in love with. Facing the end of humanity as they know it, she must convince him to trust in the magic of what if. Because failure spells doom for everyone.
Buy the book on Amazon
Mayhem Book 2 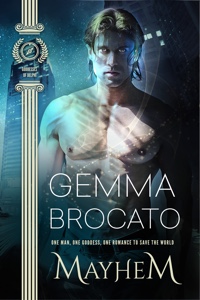 A freak solar flare plunges Nia Thanos, Muse of Astronomy, into an evil immortal’s attempt at a hostile take over of Olympus Enterprises. Her jobs—save the family business while rescuing the world from pandemonium. To eliminate the menace she must convince one mortal man to believe in the magic of what if.

‘Doubting Thomas’ Wilde hosts a television program aimed at busting myths. But when Nia confesses to being a Muse, it’s one myth he can’t bust, or believe. His refusal to help leaves Nia to face the challenge on her own.

Riots, looting, and general anarchy are minor problems compared to what’s coming if the balance of power shifts on Olympus. Nia’s undeniable attraction to Thomas wreaks havoc on her heart and threatens her ability to secure the safety of humankind. Nia finds herself fighting to persuade the one man she can’t live without to help save the world.
Buy the book on Amazon
Greed Book 3 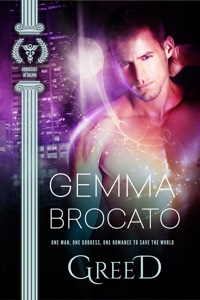 Financial reporter, Polly Thanos, Muse of Hymns, is certain the proposed merger between Delphi’s two largest firms spells doom for mankind. Eos Corporation’s long-time goal—to provide scientific and philanthropic solutions to the benefit of mortals— is lost in the quest for profits. Her challenge starts with an impossible task—inspire one mortal skeptic to believe in the magic of what if.

Scientist Ian Sommers is researching a healthier way of life for impoverished people. When his boss orders him to pursue a chemical, rather than organic solution, Ian suspects the pursuit of the almighty dollar will lead to delivering poison to the unsuspecting population.

In protest, Ian’s prepared to quit his job. But he’s shocked to discover the woman he’s falling for is an immortal tasked with stopping corporate avarice. As their attraction grows, so does the risk to them and to all humans. Without Ian’s help and his love, Polly’s faces a world not safe from the by-products of greed—death and disease.
Buy The Book Amazon
Hunger Book 4 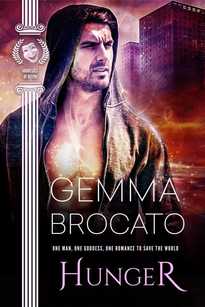 Lia Thanos, Muse of Comedy, has joked her way through hundreds of lifetimes. But the past few months have been no laughing matter. She and her sisters have been locked in a battle to save Olympus from a hostile takeover. Now, the god challenging them has upped his game and personally selected the mortal man destined to help Lia win.

Botanist Ben Jordan has his hands full; running a farmer’s market, helping his hearing-impaired sister, and trying to figure out why crops around the world are failing. If the trend can’t be reversed, humans will starve and chaos will destroy the world. The only good news is the long-time famine he’s faced in his love life came to an end when he met Lia.

Despite the fact that Ben finds it hard to believe immortal gods exist, he accepts the challenge to help Lia, a woman he yearns to spend the rest of his life with. But Pierus and his daughter, Hunger, will stop at nothing to keep the two apart. ​
Buy The Book Amazon
Hate Book 5 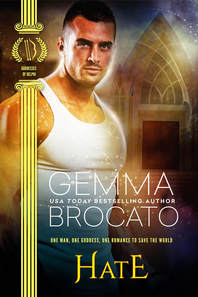 A wedding planner who’s never experienced love. Aerie Thanos, the muse of Romantic Love, is preparing for battle. Pierus, her opponent, is an ancient deity determined to unleash Hate on the unsuspecting world. Mortals’ fates are sealed unless she gets help from an unlikely source, Detective Michael Finnegan. Finn has reason to be angry. His life has all the ingredients of a tragic love story. The pair must find a way to vanquish Hate. Aerie’s determination and Finn’s anger just might be enough to save humanity; if they could only learn to get along. Sparks fly and memories resurface while they risk it all to face their own personal demons.

One power crazed deity who’ll stop at nothing to conquer the world. One goddess dedicated of love. One bitter man who resisted love his entire life. Until he meets the woman he’d die to spend eternity with.
​
Buy The Book Amazon
Goddess of Delphi Box Set Books 1-5 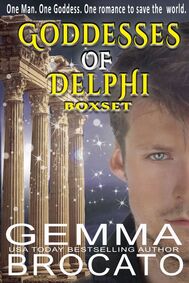 Buy all five books in this series for one low price.

Buy or Borrow on Amazon
​